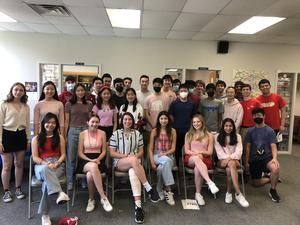 Superintendent of Schools, Dr. Christine Burton and Principal of Millburn High School, Dr. William Miron, announce the 2022 Junior Awards, presented annually to rising seniors. These are awards that are given to high school juniors who show outstanding promise and accomplishments.

Superintendent of Schools, Dr. Christine Burton and Principal of Millburn High School, Dr. William Miron, announce the 2022 Junior Awards, presented annually to rising seniors. These are awards that are given to high school juniors who show outstanding promise and accomplishments.

30 MHS juniors received Junior Awards this year. These awards are given to outstanding high school juniors by colleges and universities or their local alumni organizations.  There are also special honors awarded by the state, local organizations and corporations.

Josh Hemingson received the Brandeis University Book Award, given to an outstanding high school junior in the top 10% of the class who demonstrates a commitment to civic engagement, community service, political activism or social justice.

The Brown University Book Award is presented to a junior who best combines academic excellence with clarity in written and spoken expression. The award itself is a book written by a Brown University faculty member or alumnus. This year’s award goes to Saachi Kuthari.

Melanie Wang earned the Bryn Mawr College Book Award, which is offered to a young woman who exhibits intellectual commitment, a self-directd and purposeful vision of the future and a desire to make a meaningful contribution to the world.

Seth Abrams is the recipient of the Chatham University Book Award, which is awarded to a high school junior who shows promise in the study of Science or English and who is deeply concerned about the environment.

The Clarkson University Book Award goes to Kevin Xu and Daniel Zhang in recognition of their strong leadership qualities, positive impacts on their high school and local community, and proven record of academic excellence.

Aamir Jamil earned the Columbia University Club of Northern New Jersey Book Award.  This award is presented to a junior who demonstrates personal character, extracurricular contribution to the school, and dedication to a field of personal interest.

The Cornell University Book Award is given to a junior who exhibits the Cornell characteristics of academic excellence, intellectual curiosity and community involvement. This year the award goes to Jaiden Lee.

The Yale Club of Central New Jersey’s Joseph I Bookstaber Book Award is presented to Eric Wang. This award is given in memory of Joseph Bookstaber, a 1996 graduate of Millburn High School, to a student who exhibits outstanding personal character and intellectual promise.

The Oberlin College Book Award is presented to an exceptional student who has shown a commitment to science and social justice. This award goes to Amanda Zhong.

The Princeton University Book Award is being presented to Kayla Shan.  This award is given to a junior who ranks in the top 5% of his or her class and has demonstrated outstanding leadership and community service.

The Rensselaer Polytechnic Institute Award is presented to an outstanding junior in math and science.  This year’s recipient is Eric Wang.

Sean Woo is the recipients of the Saint Michael’s College Book Award. This award recognizes a junior who exemplifies academic achievement and social conscience, evidenced through commitment to community service, issues of peace and justice and concern for others.

The Smith College Book Award was given to Grace Zhang.  This award is presented to an outstanding junior who exemplifies the academic achievement, leadership qualities, and concern for others that are characteristics of the women who have graduated from Smith College.

Maxwell Chen earned the Tulane University Book Award that recognizes a junior who has demonstrated excellence in academics, leadership, public service and embodies the motto "The needs of the many outweigh the needs of oneself."

The University of Chicago Book Award is given to a junior known for making connections across academic disciplines, is scholarly and dynamic, and a visible member both of the student body and the greater community. This year’s recipient is David Fu.

Two students, Vatsal Garg and Aarohi Kuthari, are receiving the University of Pennsylvania Book Award, sponsored by the Metropolitan New Jersey Alumni Club. This award is presented to 2 juniors who best exemplify the qualities of Benjamin Franklin --  a scholar, innovator, and community servant.

Arihan Hukeri earned the Frederick Douglass and Susan B. Anthony Award in the Humanities and Social Sciences.  This University of Rochester Award recognizes academic achievement of a student who exemplifies the revolutionary spirit of Douglass and Anthony.  It encourages an equal emphasis on study, community action, dialogue and excellence in rigorous courses taken in the humanities and social sciences.

Kayla Shan received this award that honors outstanding high school science students who have demonstrated high achievement and rigor in science classes, along with positive contributions to their school and within the larger community.

This award goes to a junior who demonstrates outstanding achievements in computer science, enthusiasm in pursuit of innovative approaches and appreciation for the possibilities of technology. This award goes to Deena Weiss.

The Wellesley College Club Book Award was given to Kayla Wang.  This award is presented to a young woman whose academic record and character are exceptional and who has also made significant personal contributions to her schools and/or community.

The recipient of the Wesleyan University Book Award is Joseph Weintraub. The award is given to a student who demonstrates independent thought and creative thinking consistent with the spirit of free and energetic inquiry, and who has demonstrated extracurricular achievement, school leadership, community involvement or commitment to the arts.

Started in 1945, this week-long program, sponsored by the Millburn Short Hills Chapter of the American Legion, unites boys from all parts of New Jersey each summer to learn about Municipal, County and State Government and good citizenship.  Delegates are selected by the local chapter and MHS Faculty. This year’s Delegates are: Seth Abrams, Michael Exelbert, Vatsal Garg, Evan Shidler, Nikolas Skalkotos and Andy Xu.